Note: Contrary to what a few commenters believe, I did indeed use a pretrimmed tenderloin for this recipe and not a loin. I think the confusion arose from the fact that my tenderloin was not as longs as they sometimes can be. Plus the angle of some photos might have made it appear a bit more like a loin.  In any event, a tenderloin was used for this recipe. If you wish to use a loin, aim for a small one and monitor internal temperature as cooking times may vary. I have made this same recipe with a small prepackaged loin with no issues and pretty much the same cook time.  To learn more about the difference between a loin and and tenderloin see this article. 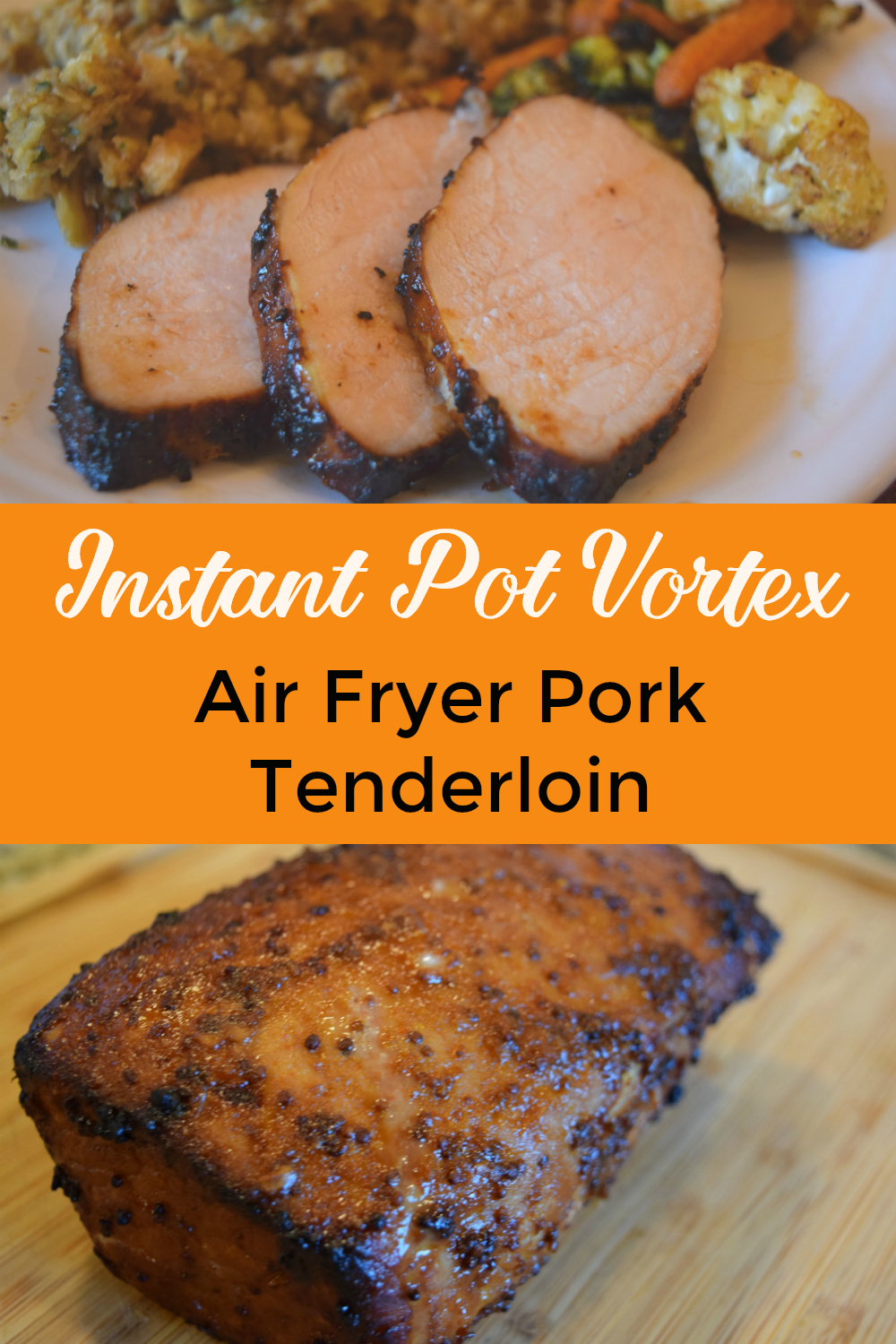 For my tenderloin, I grabbed one without marinade one from the grocery store. It weighted just a bit over a pound.  You can buy marinated or preseasoned pork tenderloins as well if you want to make things easy and not do your own marinade.  For example, Smithfield makes a number of different varieties. I made one tenderloin, but two could fit.

Do not confuse pork tenderloin with pork loin.  They are not the same cut of meat.  I do plan to do a pork loin in the Vortex at some point too, probably on the rotisserie. 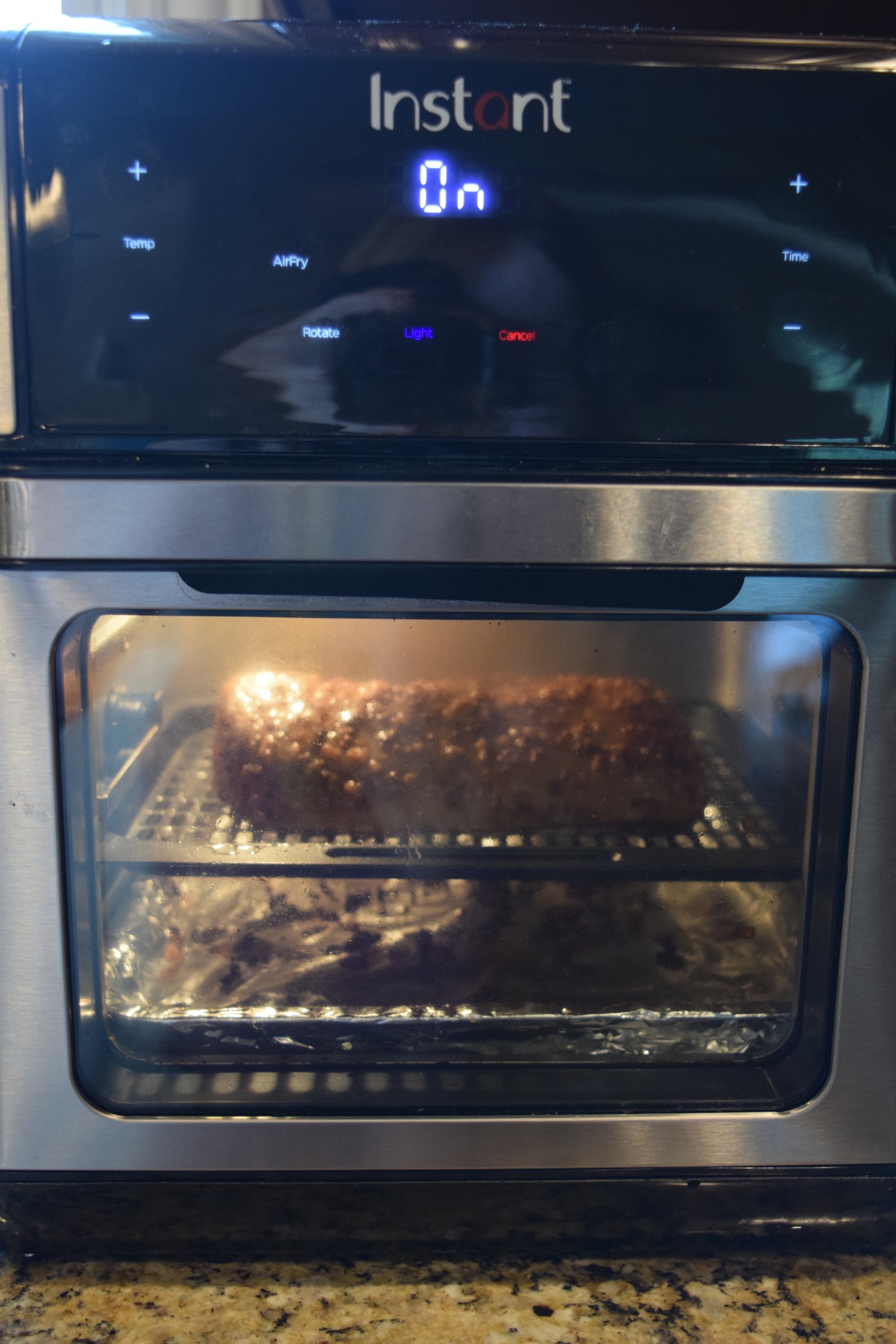 I did not use the Instant Pot Vortex rotisserie for this recipe, although you could do so.  Pork tenderloin sits so nicely on a tray and browns up just fine if you are willing to flip it from time to time during cooking.  If you have an air fryer that is not a Vortex, simply put the tenderloin in the basket or on a tray.

If you want to try the rotisserie, be prepared to adjust cooking times. I suspect it might cook a bit faster. 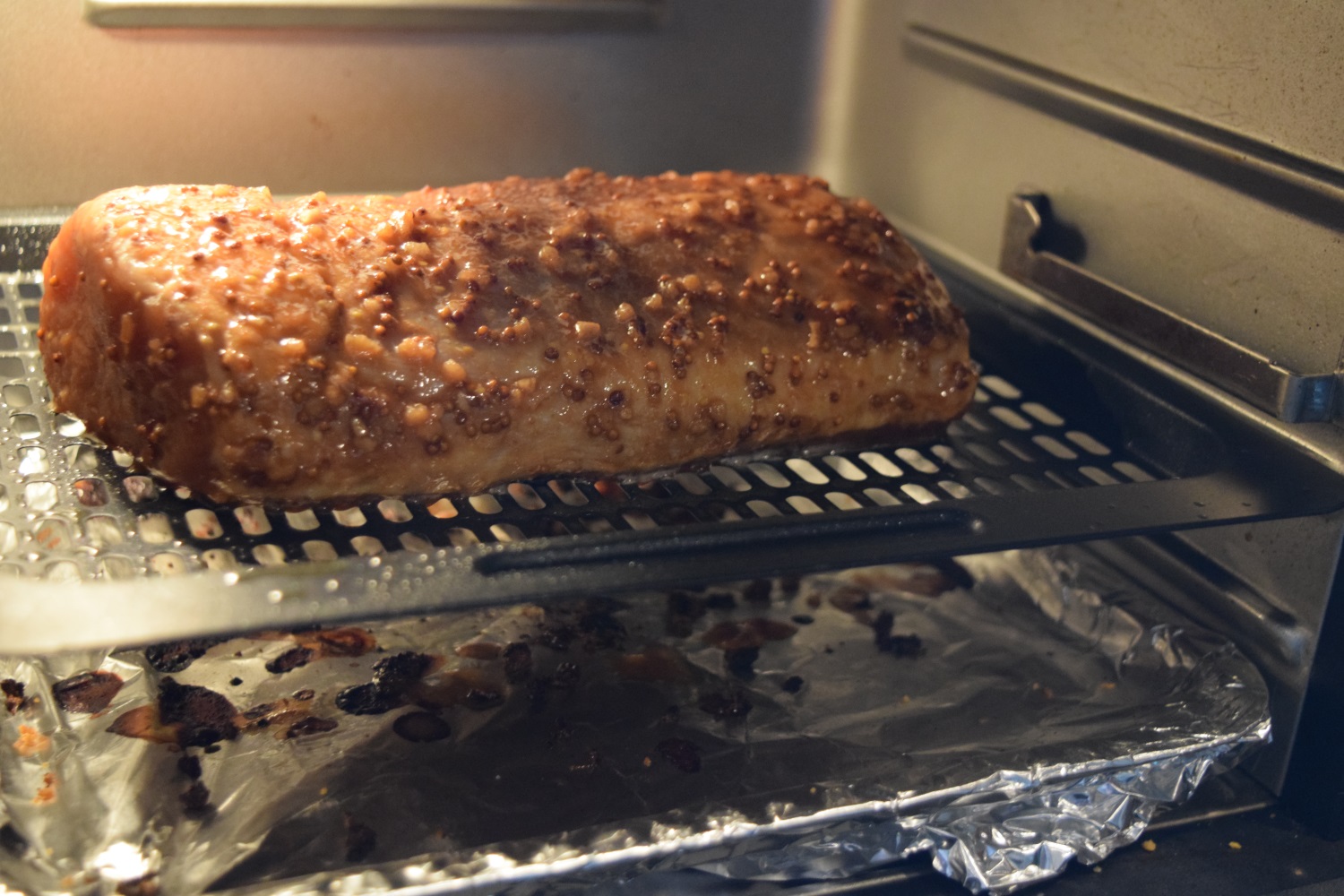 To make a marinate pork tenderloin in the air fryer, I like to mix up the sauce and marinate the loin in it for awhile (anywhere from an hour to overnight). But that isn’t really necessary since the prepacked ones from the store usually come in a brine of some sort and are already tender.  So you can just mix up the marinade and go straight to cooking  if you like. 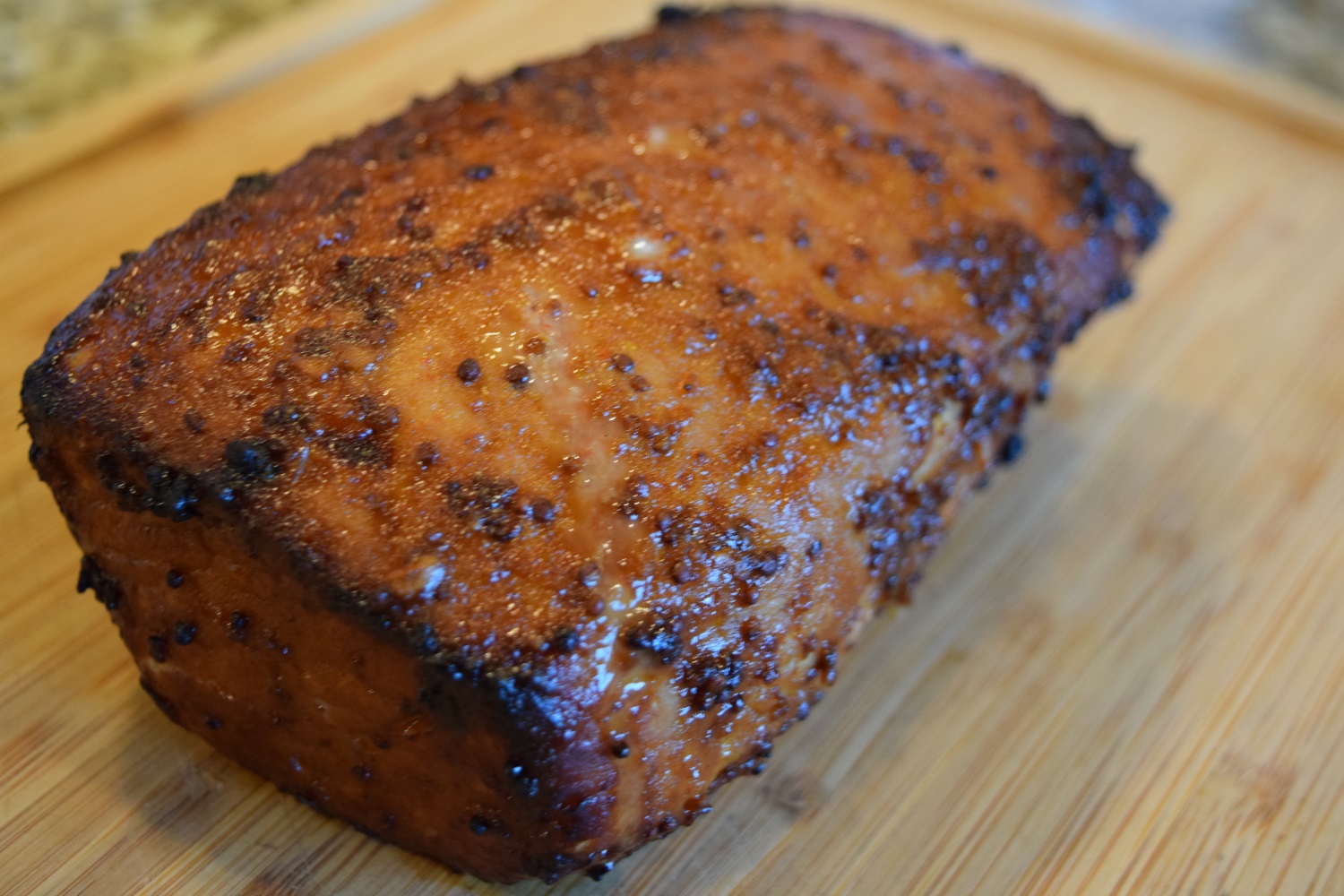 The sauce for this Instant Pot Vortex pork tenderloin recipe uses both grainy mustard and Dijon mustard, along with garlic, honey and a bit of sriracha for spice. You can omit or increase the sriracha for taste, or substitute another hot sauce.

I mix everything up in a bowl and then pour it into a baggie, then add the tenderloin.

Once the pork tenderloin is coated well, transfer it to an air fryer tray that has been sprayed well with cooking oil.  I set my Vortex to 380 and cooking time was 26 minutes total for my best roast. You want to cook until the pork temperature measures at least 145 degrees after inserting a meat thermometer in the tenderloin from the end, pushing it to the center.  This temperature is the best for a medium pork roast that is super juicy. For well done, which I don’t really recommend, but I know preference vary, take it to 165. That will require around 5 minutes more cooking time.

I turned my tenderloin at minutes 20, 15, 10, 7, and 4. Each time, I basted it  with a bit more of the sauce by brushing some on. This makes a nice tasty crust on the pork. You do not have to be precise on when you turn it. I ignore when the Vortex tells me to turn to food on most recipes. 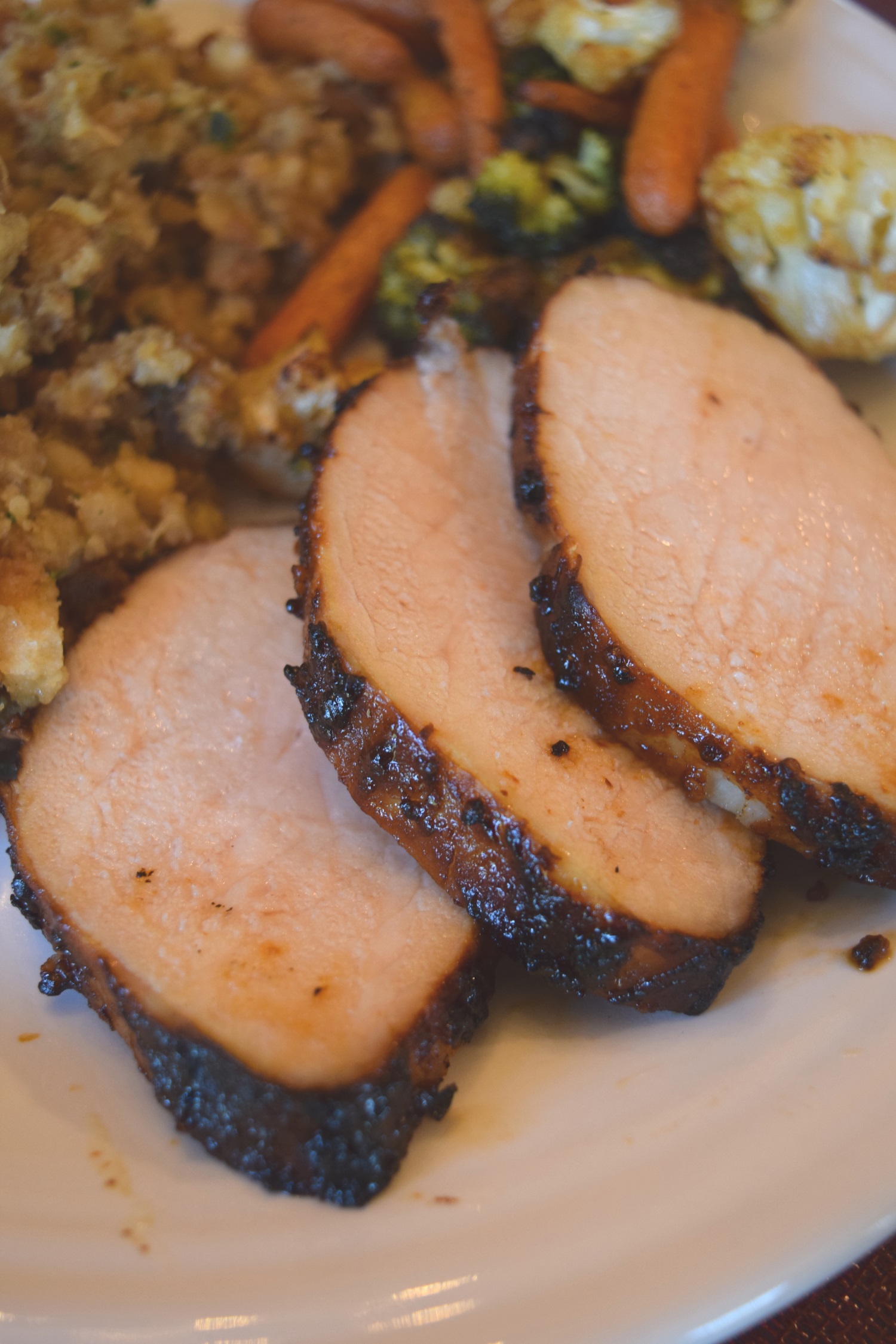 The air fryer function will make the pork crust very deeply brown, especially since the sugars form the honey will caramelize. If yo prefer a less darkly browned roast, you can try the roast function instead. Just make sure to monitor the meat temperature.  Regardless, this is meant to crisp up with a dark crust.

You can make this as an air fryer keto pork tenderloin recipe by omitting the honey and instead using something like Vita Fiber which will help make the sauce sticky without adding sugar. It also will be fine with no Vita Fiber at all, although I would then increase the mustard a bit. 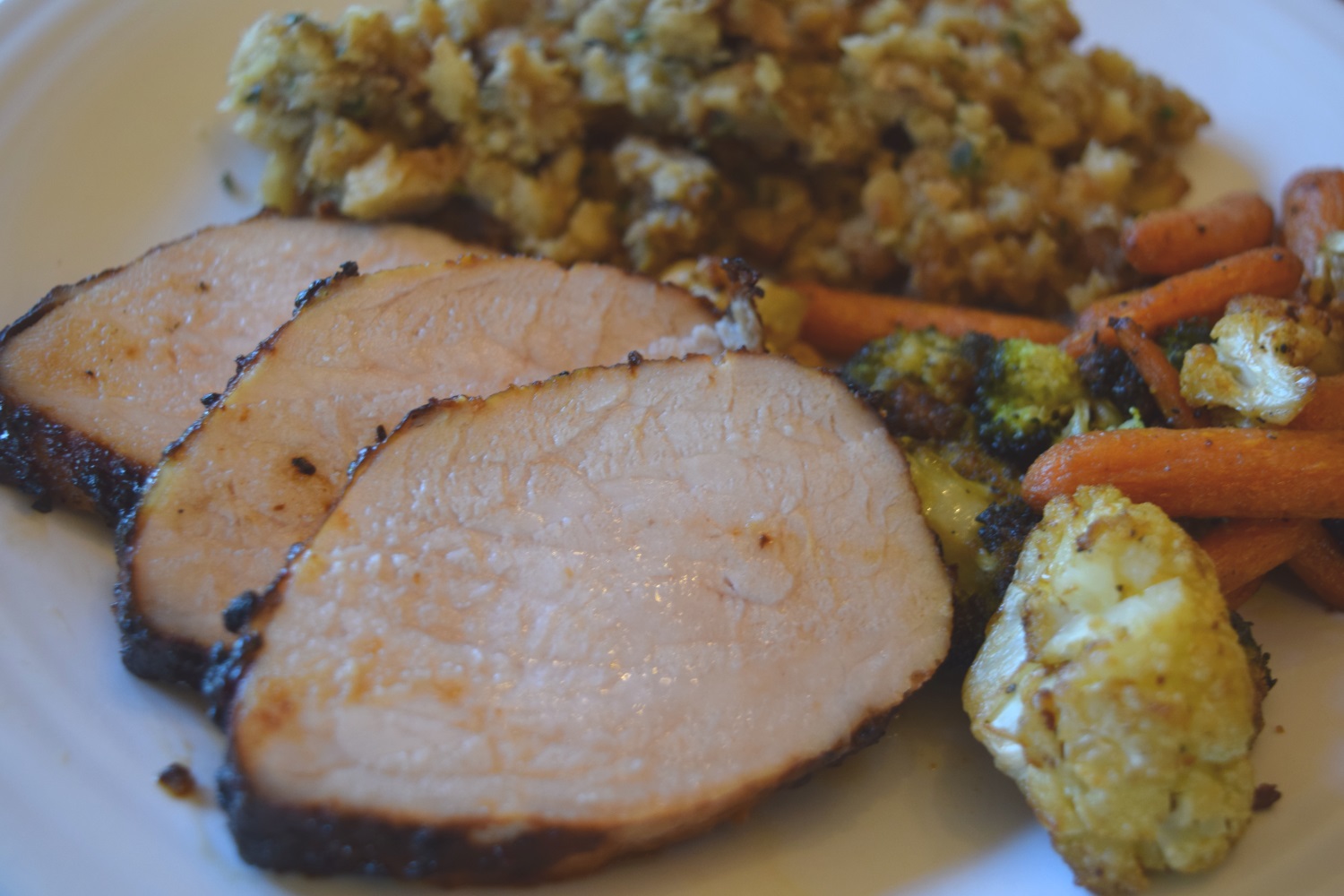 After removing the pork from the air fryer, let it rest for a few minutes covered in foil, then slice it. On small tenderloin will feed 3-4 people, You could fit two in the Vortex for a larger family. 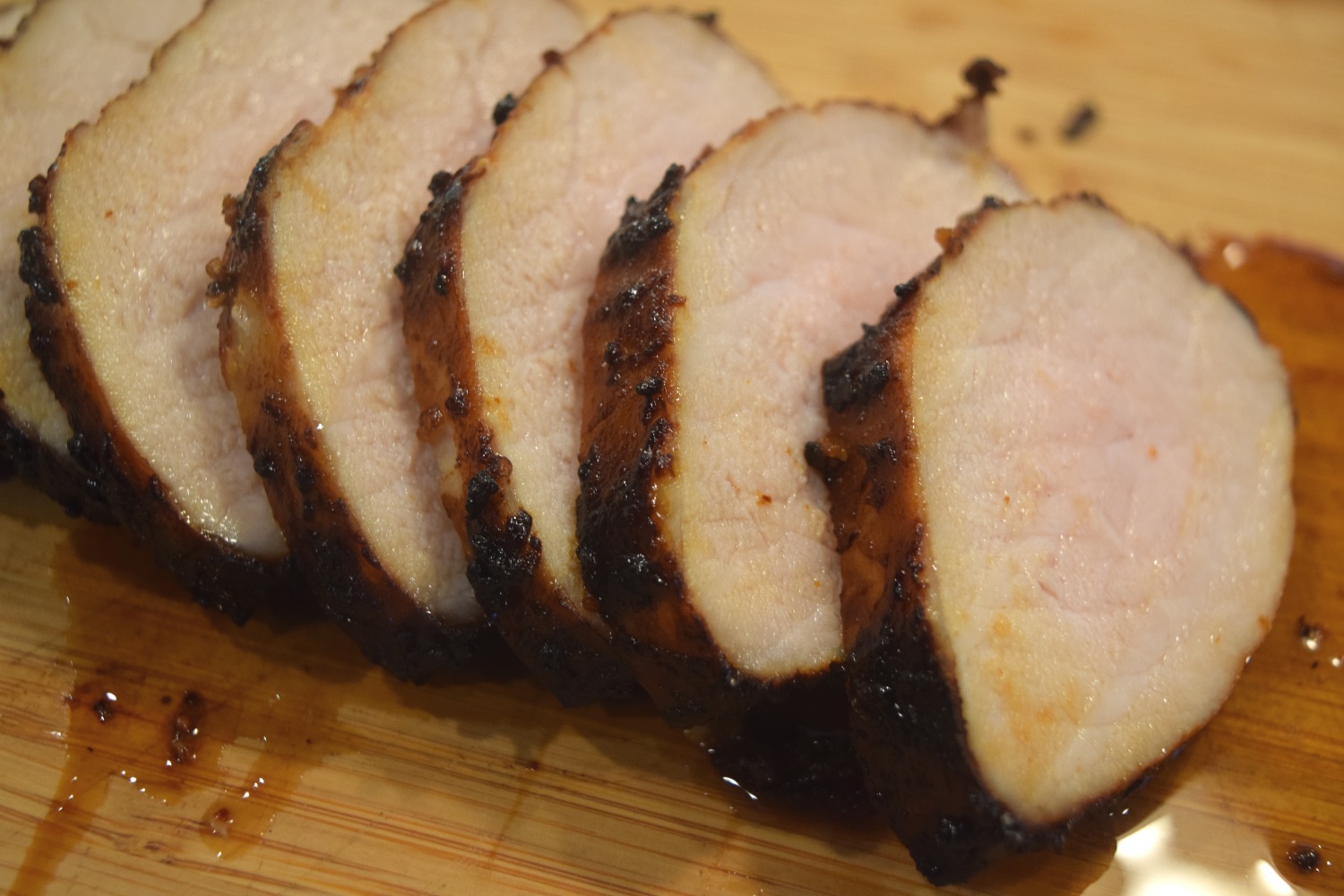 I served my Instant Pot Vortex pork tenderloin with air fryer roast vegetables  I made those earlier in the day and simply gave them a quick reheat while the pork was resting. I also made some stuffing the boring way by using a boxed brand made on the stove. It was one of my favorite meals yet done in the Instant Pot Vortex Plus. 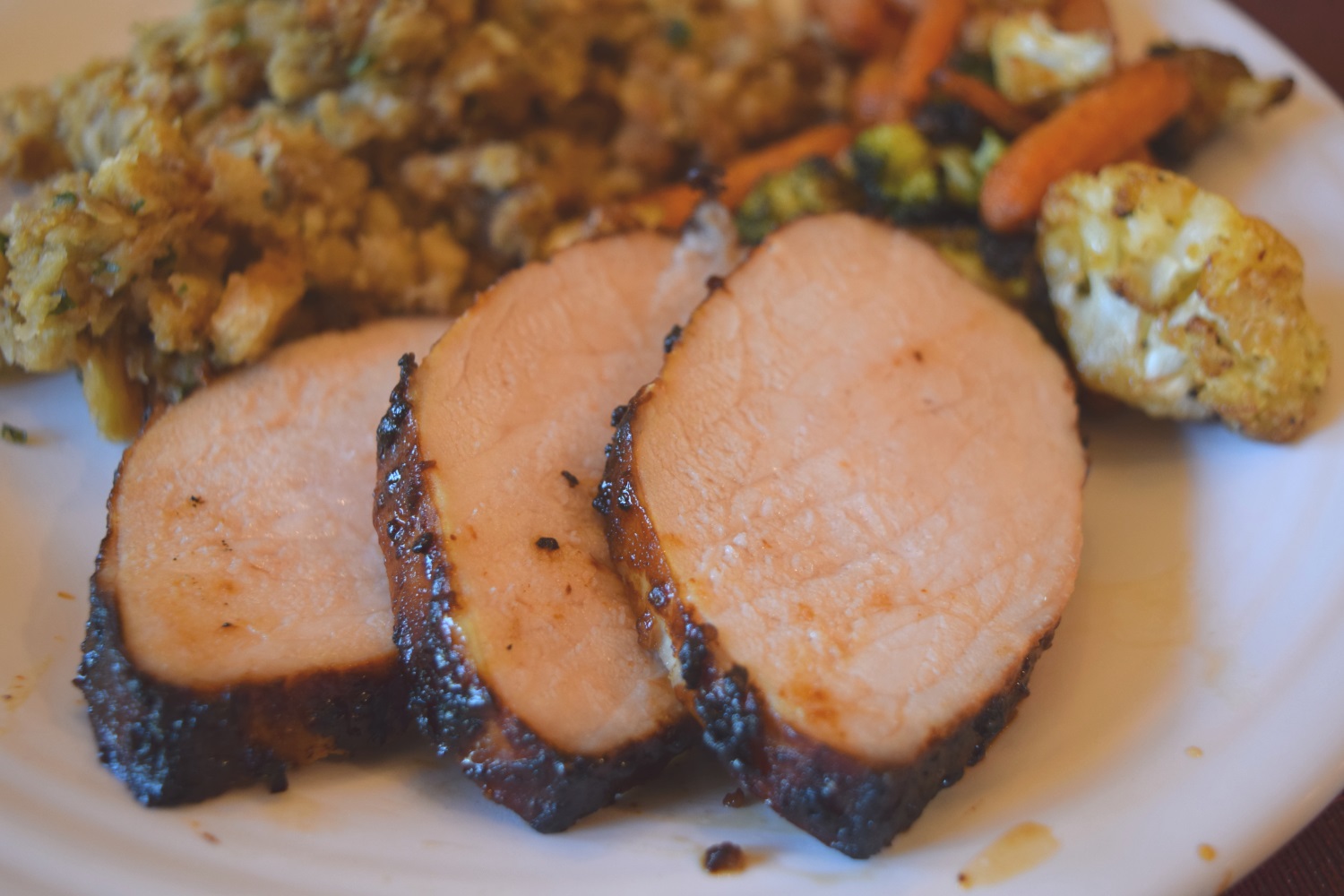 I ignore when the Instant Pot Vortex tells me to turn the food. I usually turn more often than its presets uses.

You can make this in any air fryer. It was done in the Vortex Plus, but a basket style fryer will work just as well.

As an Amazon Associate and member of other affiliate programs, I earn from qualifying purchases. 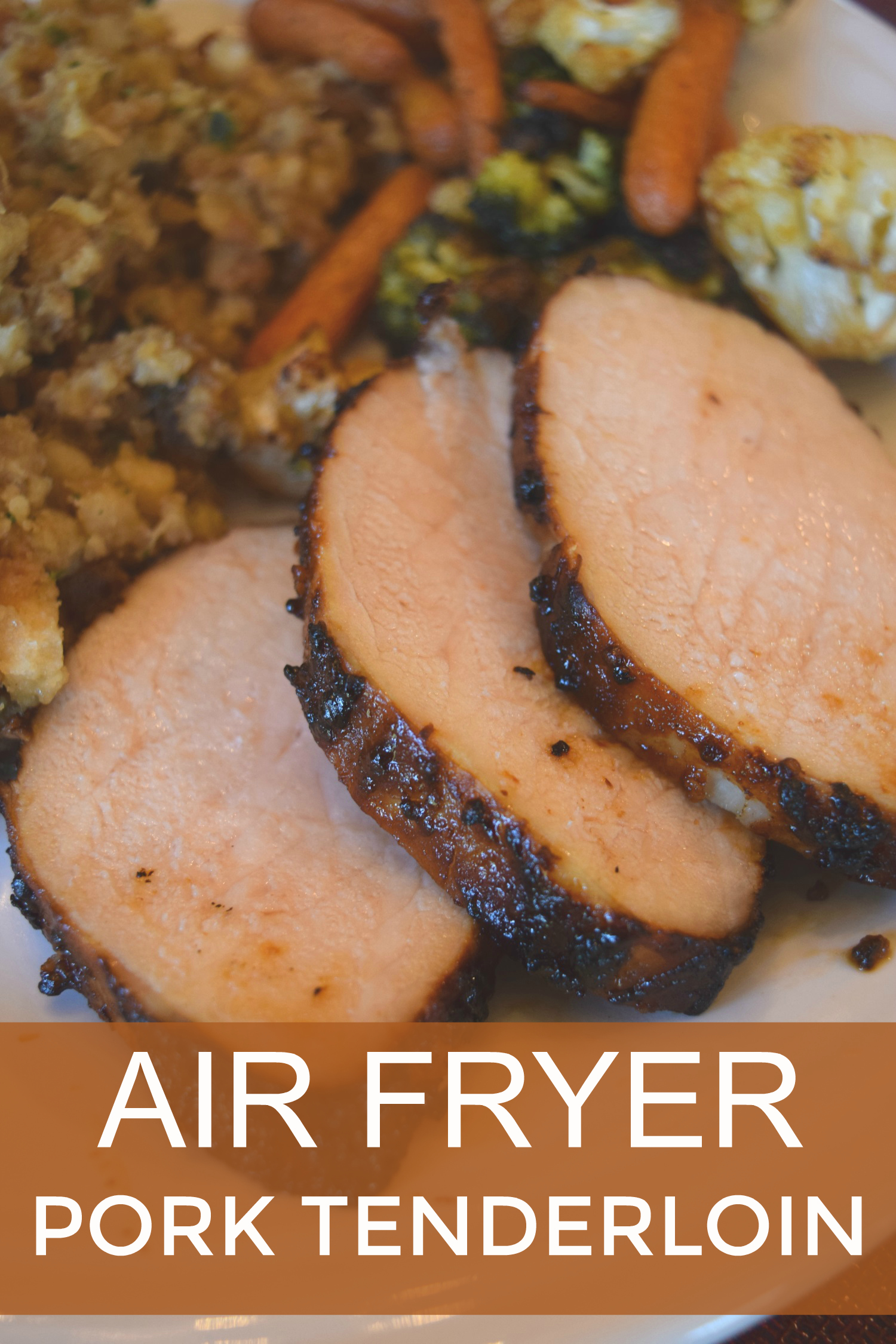 Did on air fry and rotisserie came out perfect

Have you tried the rotisserie spit instead of turning so often? I wondered about doing this.

I have made tenderloin on the rotisserie. It comes out just fine, but I find that doing it on the tray is actually easier.

You used a pork loin not a tenderloin. Totally different cuts of meat. Know your terminology and products before telling people how to cook.

Hi, I assure you that I used a tenderloin and not a loin. I used a pretrimmed loin from my local store. It was a small and rather short one. As I noted in another comment, you can also use this recipe with a loin, but finding loins that fit the vortex well can be a bit more difficult. Some of the prepackaged ones are very similar though and I have made this recipe with those as well. A loin might also require a bit of an adjustment in cooking time. Just be sure to monitor the internal temperature. Otherwise cooking instructions are the same.

Can I use ground mustard instead of grain mustard?