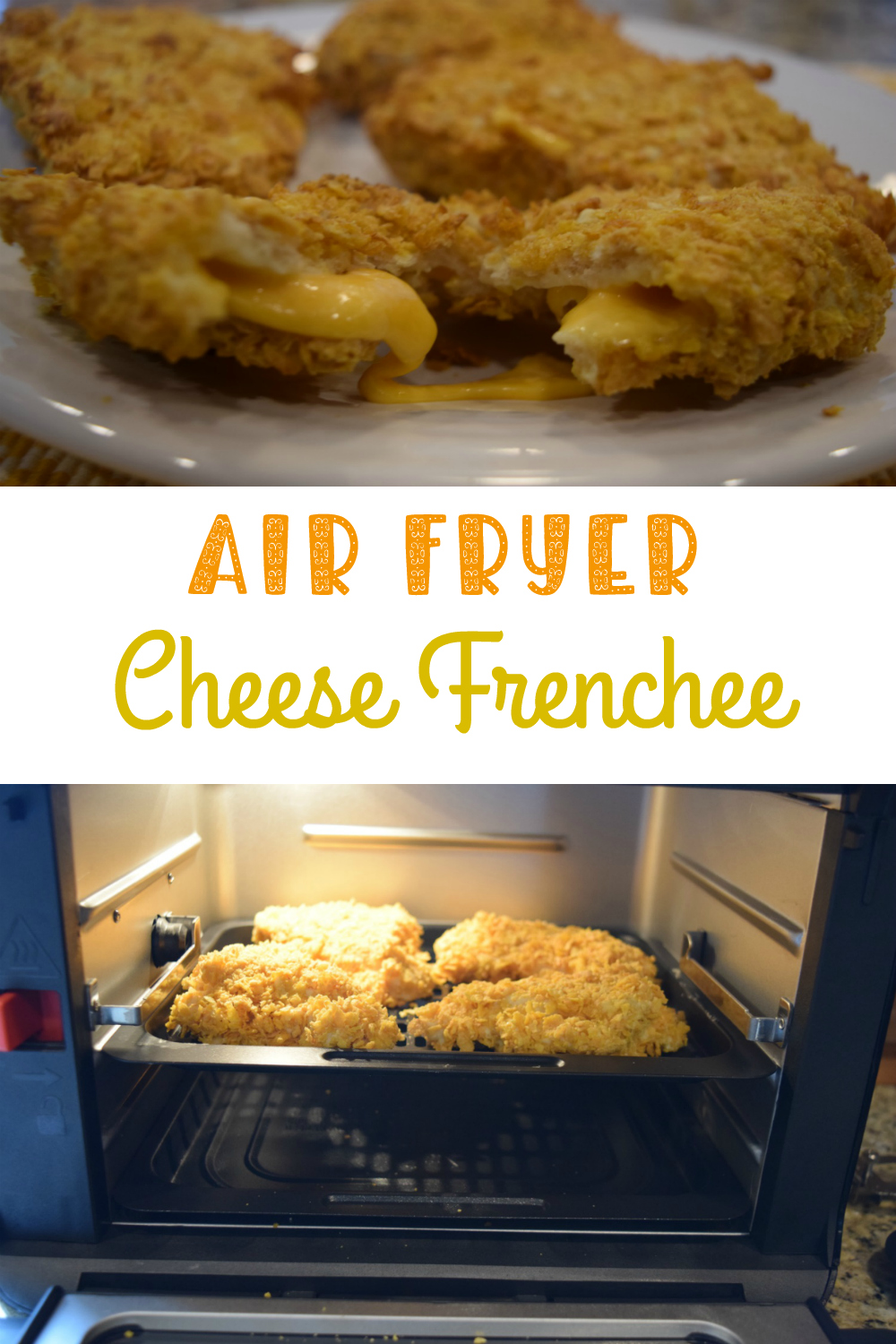 About the Cheese Frenchee 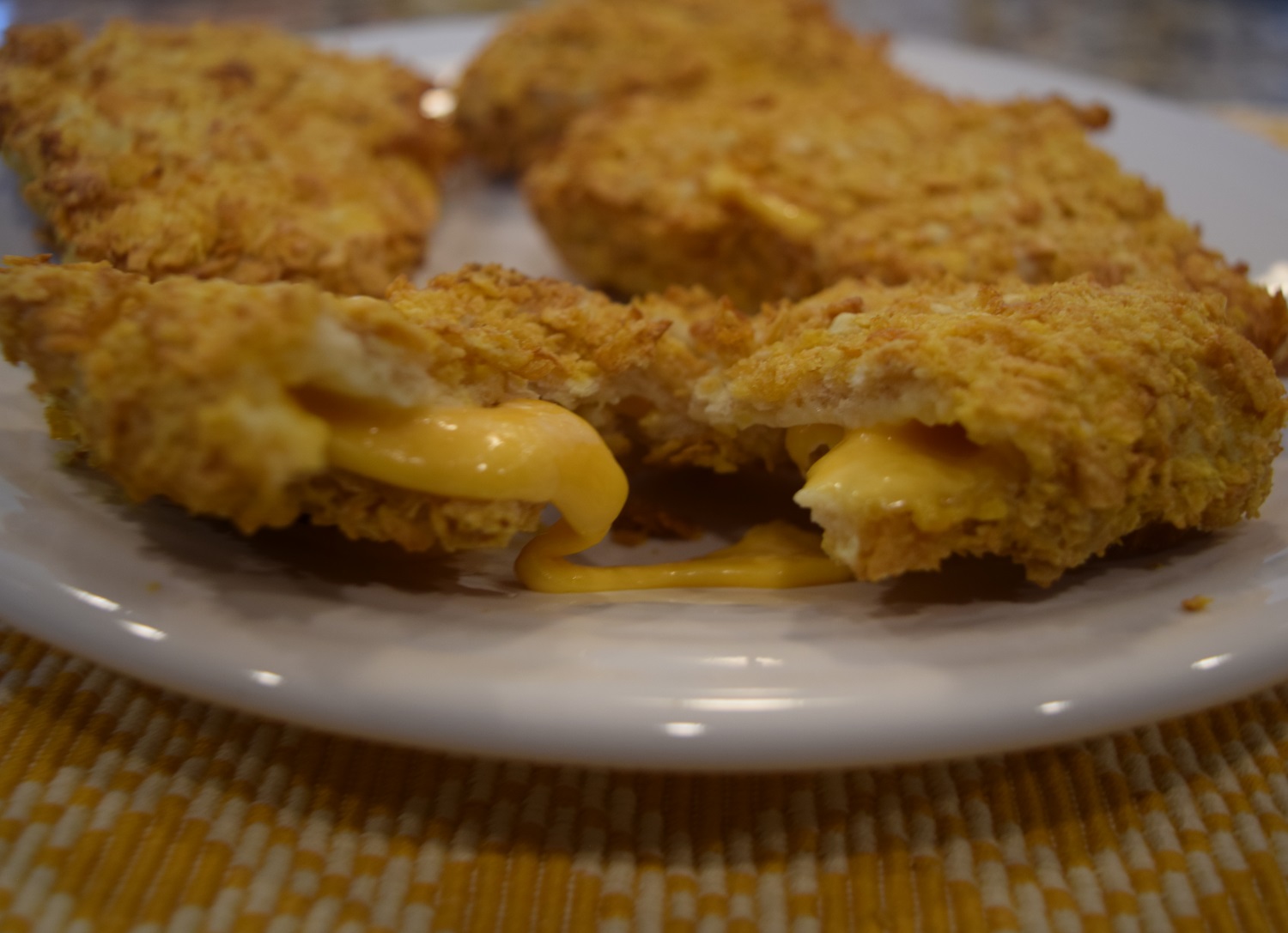 When I moved to Illinois I was surprised to find that nobody had ever heard of a cheese frenchee. Apparently it really is just a Nebraska thing. The Cheese Frenchee originated from a drive in restaurant called Kings’ Food Host in Lincoln, Nebraska.   King’s was my favorite as a child, and they made not just great deep fried cheese sandwiches, but also wonderful burgers and onion rings. King’s was eventually closed, but later reborn in part by a local fast food brand, Amigos/Kings, so the cheese frenchee made its return. A restaurant called Don and Millies in Lincoln and Omaha, Nebraska also  makes cheese frenchees.

Normally, a cheese frenchee is deep fried at about 375 degrees. Using the air fryer makes it quicker and simpler. But, it still is a messy proposition as it involves dipping in a thick batter and rolling in corn flakes.  Don’t expect a super clean kitchen with these! But I find the messy dipping kind of fun.

My original deep fried sandwich recipe called for using crushed corn flakes, so I stuck with that, but you can use Ritz crackers, panko, or other break crumbs. You can also make variations of the frenchee such as a ham and cheese frenchee or tuna frencheee.

Start off by mixing up a batter of egg, milk, flour, and salt. Then crush corn flakes by putting them in a baggie and running a rolling pin over them.

For the sandwiches, typically the crust is cut from the bread, although you can leave it on if desired. Add mayo or Miracle Whip (another Midwestern thing it seems) to the bread and two slices of American cheese. You want all of the cheese under the bread, so fold it in half or cut it as needed. Then slice the sandwiches into triangles. 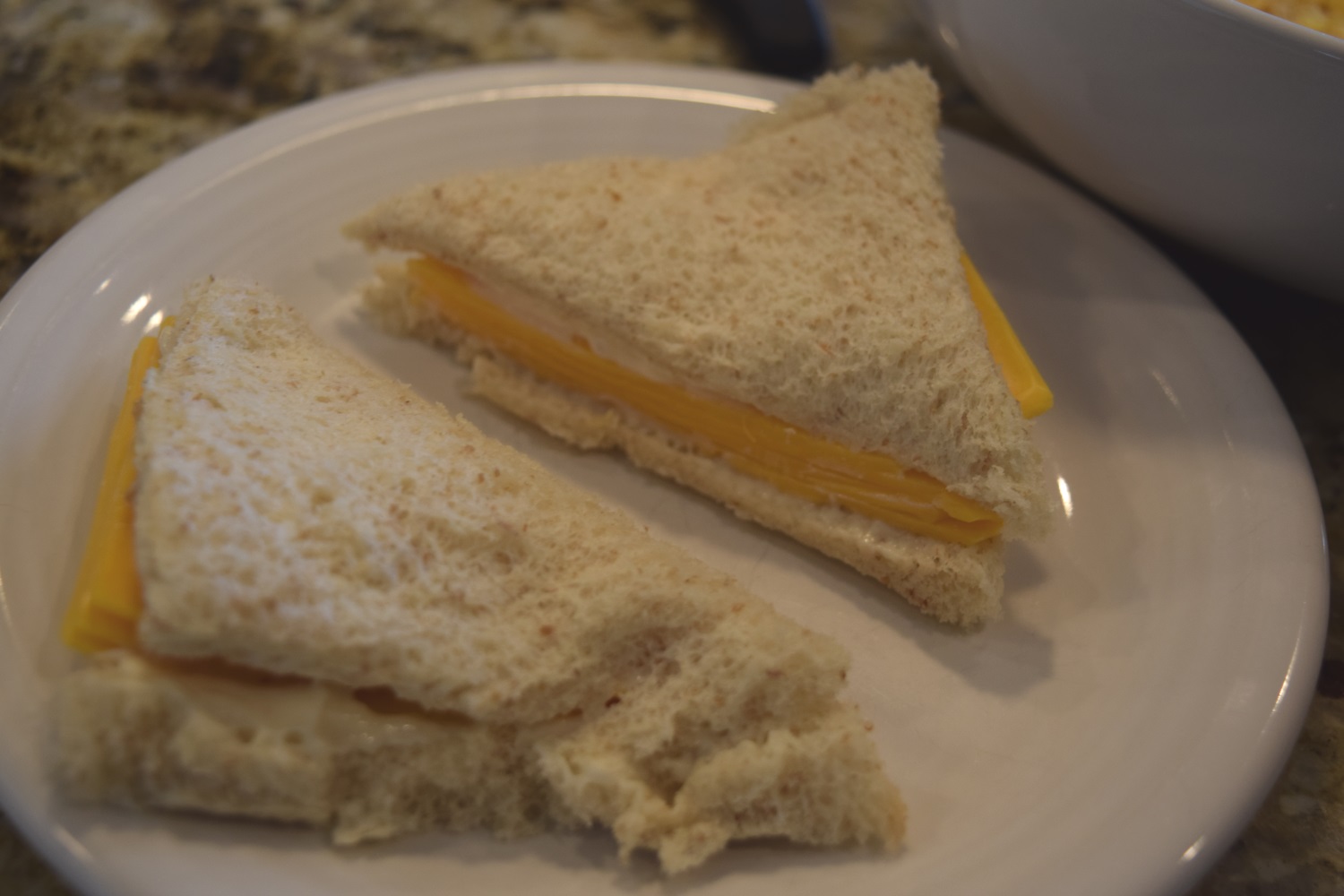 Now comes the messy part!  Coat the triangles with the batter and then roll them in the crushed cornflakes. It is messy, messy, messy! But sort of fun too! I find that using a spoon to help coat them makes it a bit easier, but ultimately you will have batter all over your hands. 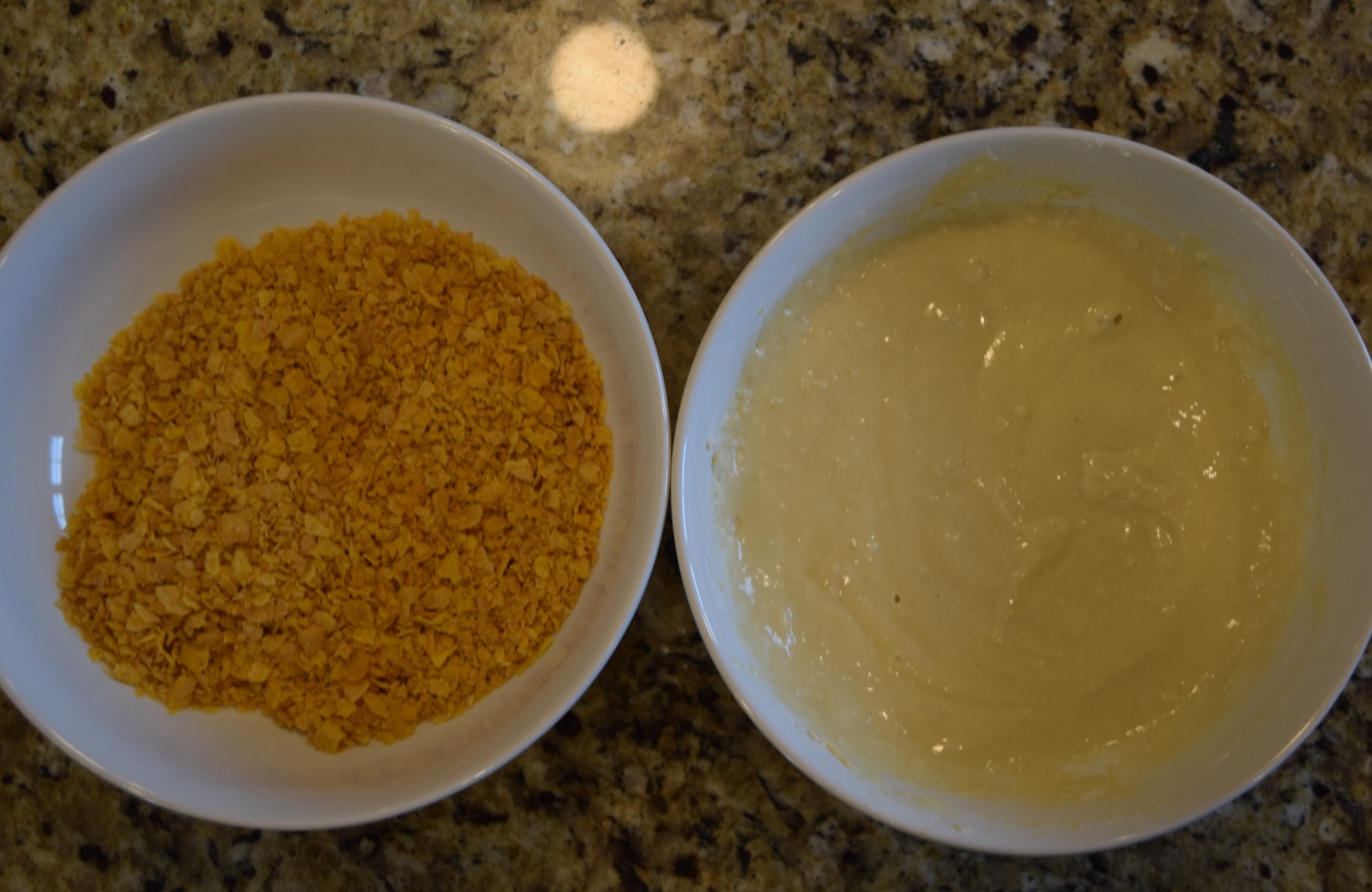 Lay the cheese frenchees onto an air fryer tray  and air fry for 6 minutes, turning half way. I preheated the Vortex to 375 for the recipe. 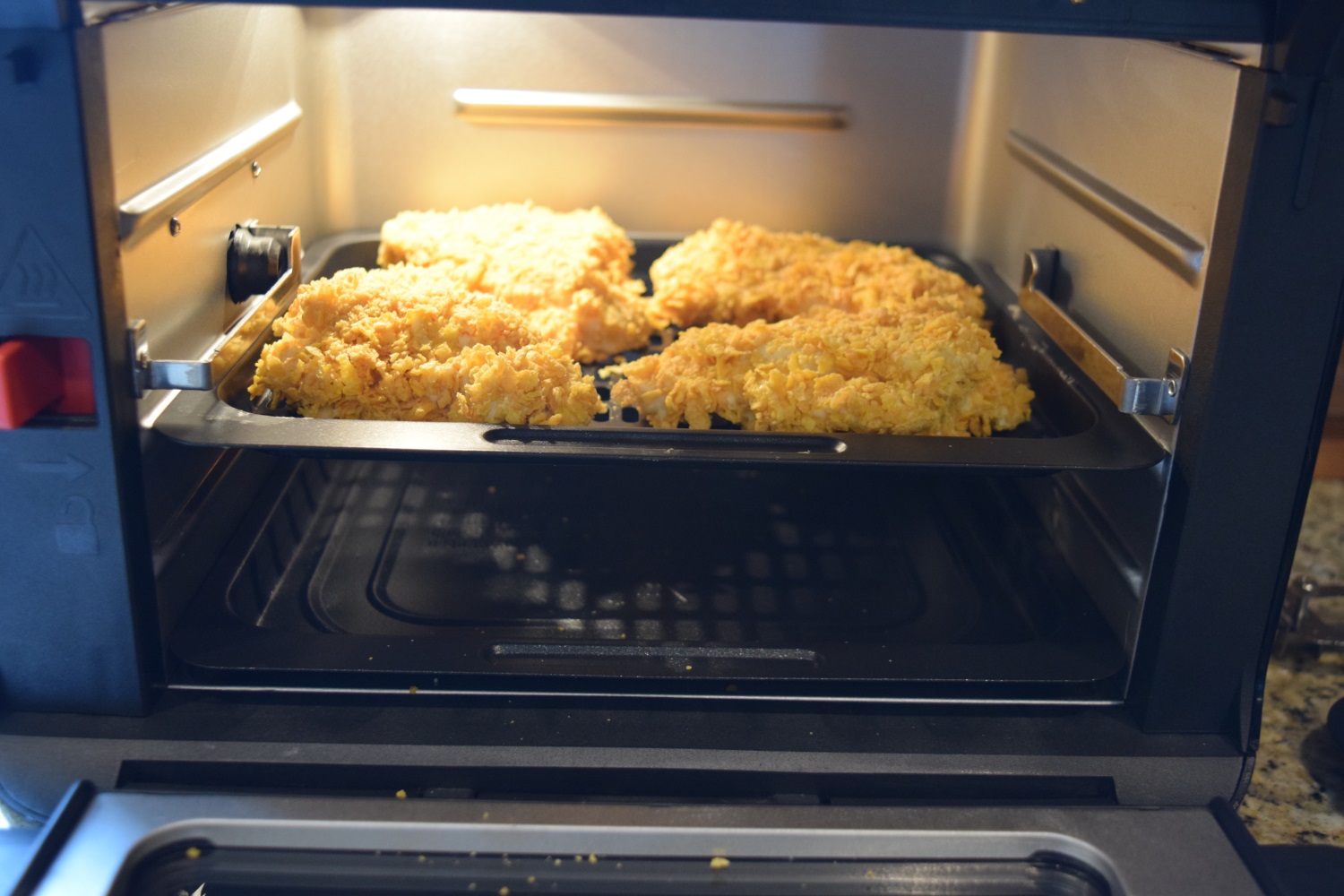 When done, remove and eat while the fried cheese sandwiches are still warm. Air frying makes them healthier because no oil is involved. Although let’s not kid ourselves here, these are still pretty decadent sandwiches. Not diet food by any means! 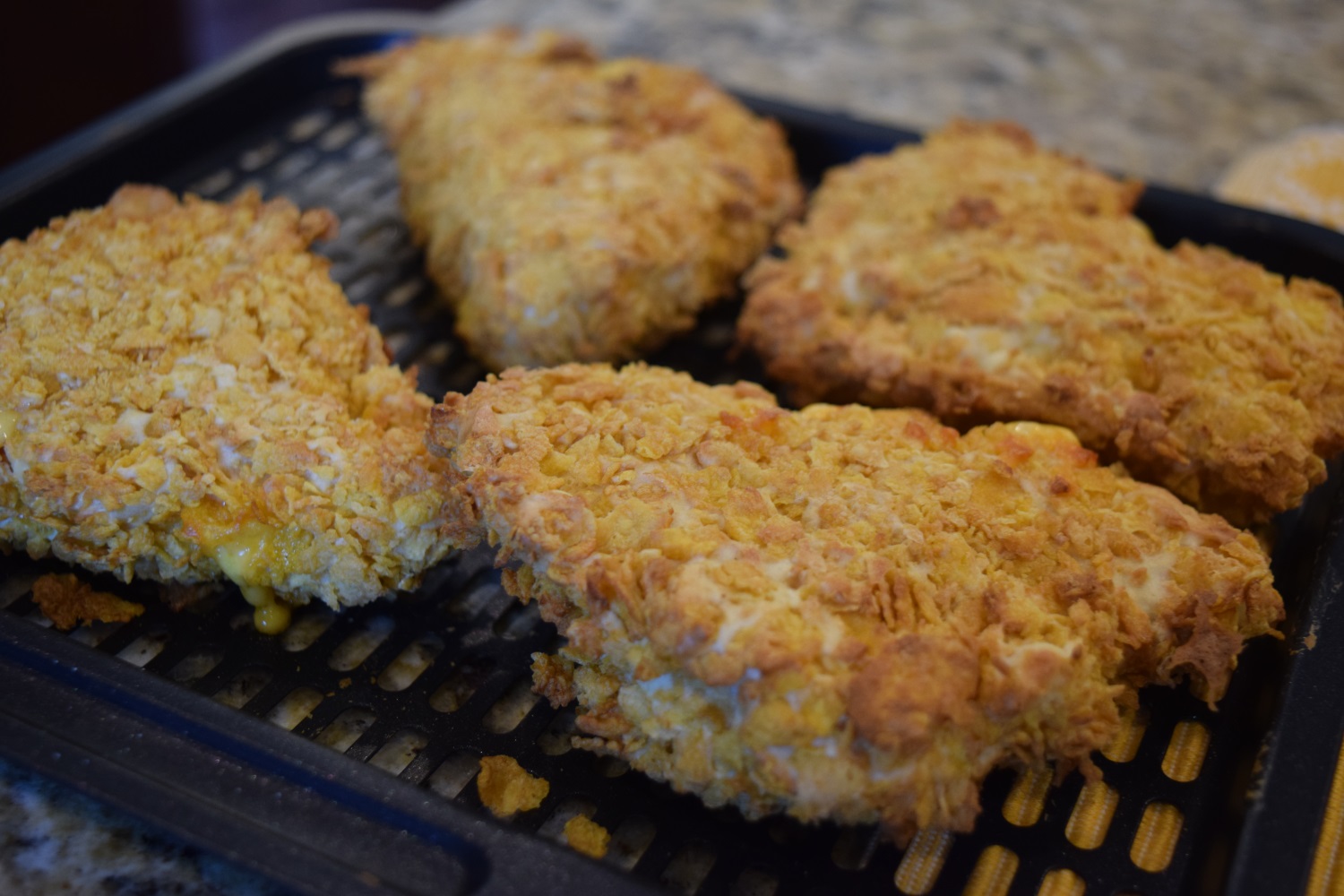 I was quite happy with the results of my air fryer cheese frenchee experiment.  If you want to make these the regular way, deep fry them at 375 until golden brown. 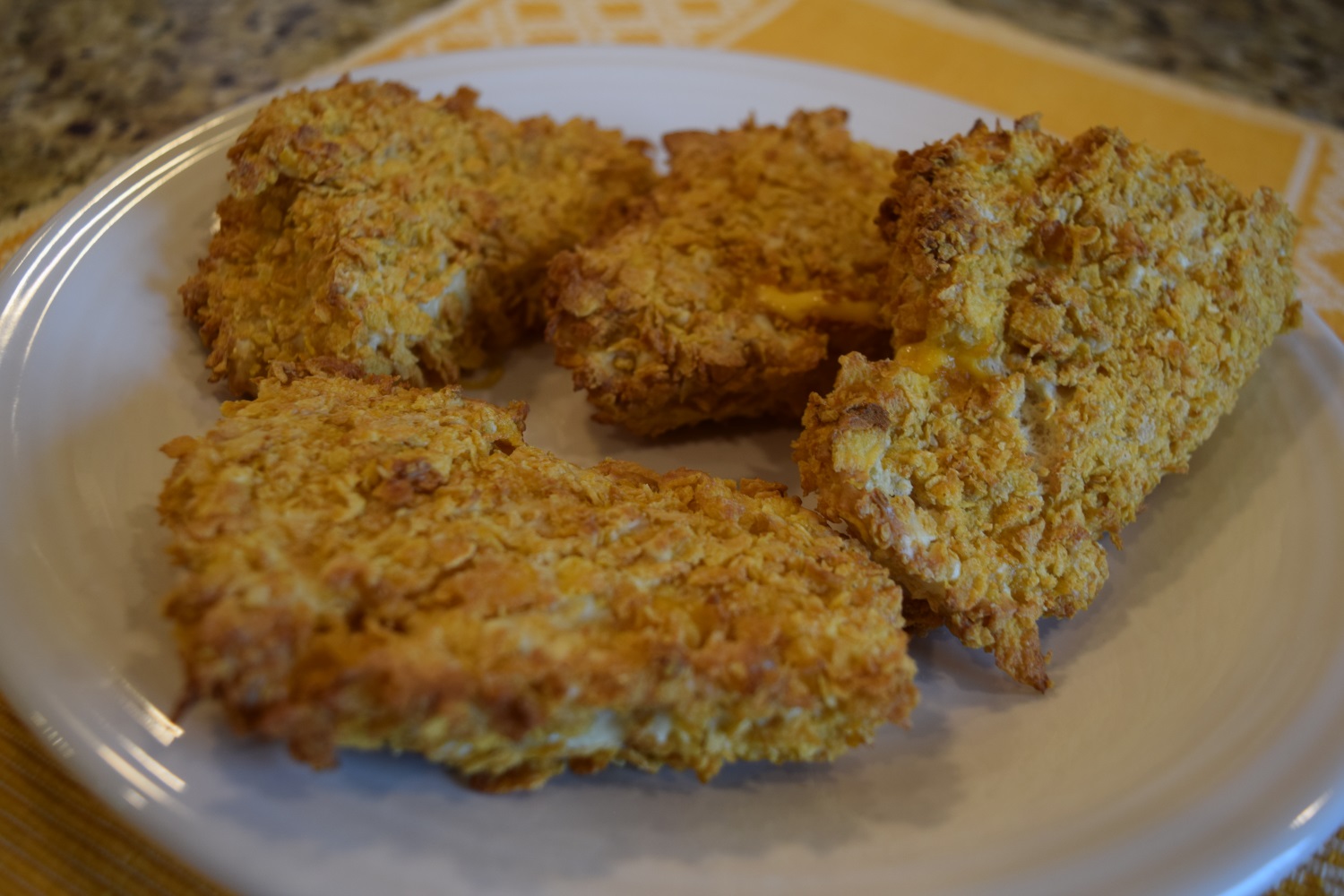 This is a rather messy recipe! Be prepared for gooey hands. But it is worth it!

As an Amazon Associate and member of other affiliate programs, I earn from qualifying purchases.

I just went to the Amigos site from your link. They now have a jalepeno popper frenchie I make try to reproduce. Thanks for the recipe. Dave's input was great as well. I don't think I've had a frenchie in 40 years. Time to change that.

I just got back from Nebraska and saw that they had the jalapeño version! It looked good, but I didn't try it.

Wow, thanks for this post and the memories. Definitely not just a Nebraska thing. We had a King's Food Host in Norman, OK when I was in college there in the early 70s. I ate there often because my husband worked there so food was discounted. Haven't thought about the frenchees for years, and now I can't wait to try this recipe!

I had no idea that Kings had made it clear to OK! They are still around in Nebraska, but paired with Amigos Mexican, which is an interesting combo!

I used to eat cheese frenchees all the time as a kid and have been making them myself in an air fryer. I do things a little Differently and I think mine are very close to the original. I use 3 slices of cheese-I know they used to use only 2 but the slices are thinner now than they used to be. I also make sure the corn flakes are smashed really fine-they stick better that way and I spray the whole thing with butter flavored Pam spray before I put it in the air fryer-this way it comes out beautifully brown and taste more like the original which was deep fried. The last thing I do is make the cheese frenchees ahead of time and then freeze them before cooking. I thought about this and I’m sure this must be how King’s used to do it since you know they wouldn’t make them as ordered. When I froze them I discovered they tasted better and I spay the Pam on just before placing them in the air fryer. The outside is crispy and brown and the cheese is completely melted and this is as close as I can come to the original without going to Nebraska. In fact, I’d have to say Mine actually may taste better-I like that they aren’t as greasy but still crispy and brown. This is NOT a healthy food but a nice indulgence and a nice trip down memory lane for us who grew up eating these.

I like the idea of freezing them! I'm going to give that a try next time that I make them!

[…] For an example of a recipe using Corn Flakes, check out my Air Fryer Cheese Frenchee recipe. […]

We Tested The Instant Pot Air Fryer. Here Is Our Honest Review!