For more on Pot Roast in general, including cuts of meats, cooking times and tips etc., See my post: Instant Pot Pot Roast, the Ultimate Guide. 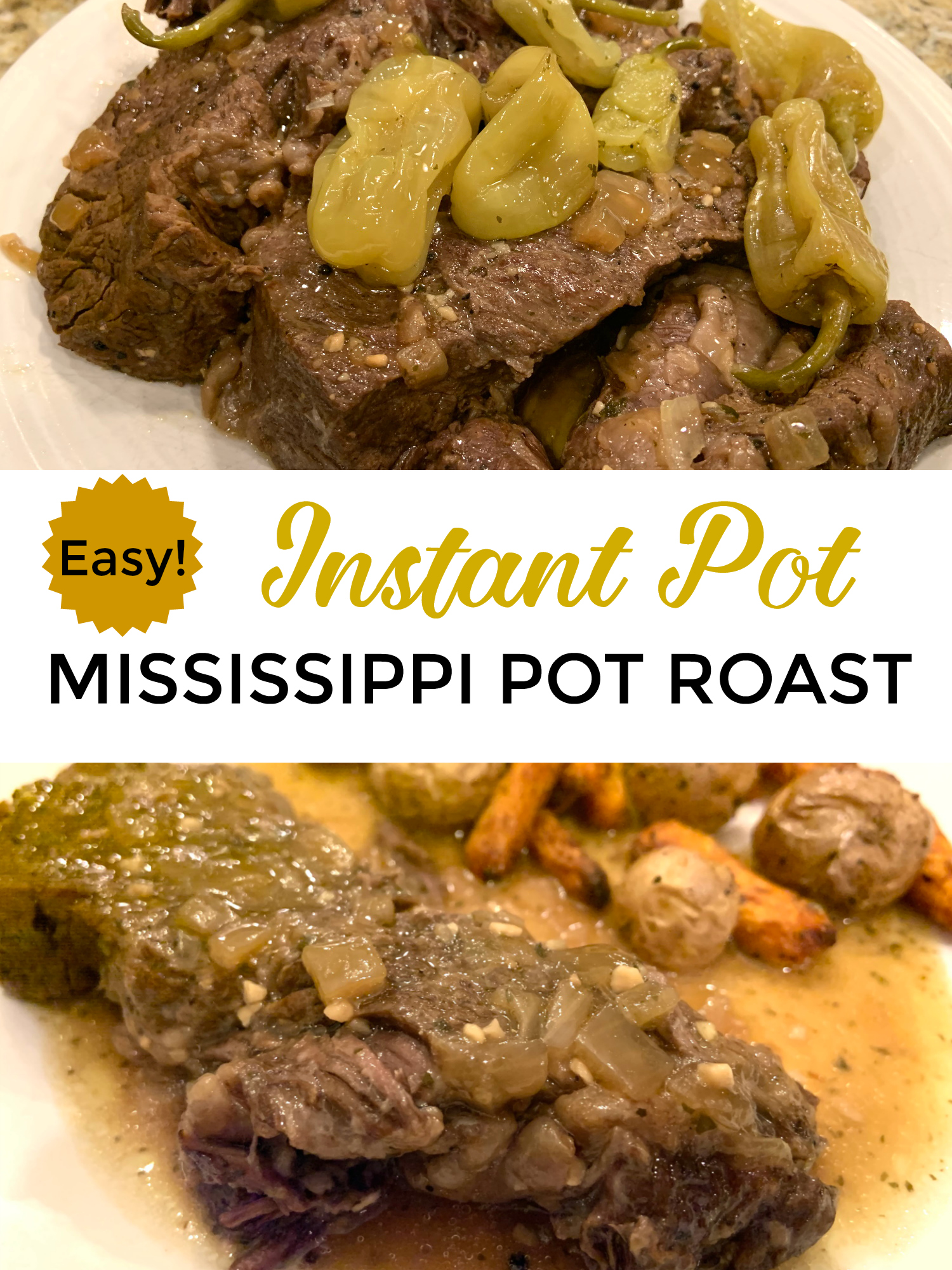 What is Mississippi Pot Roast?

Mississippi pot roast reportedly originated with a home cook in Mississippi who managed to turn the dish into a hugely popular pot roast variation.

Don’t worry about the peppers making the dish too spicy. They do not. Instead, when mixed with the ranch dressing, they give the roast a unique tangy flavor. The spice factor in terms of heat is quite mild. But it is a unique flavor.

This recipe sticks to the traditional mix with some onions and garlic added. I also add a bit of my favorite secret ingredient for a good pot roast: Montreal Steak seasoning. 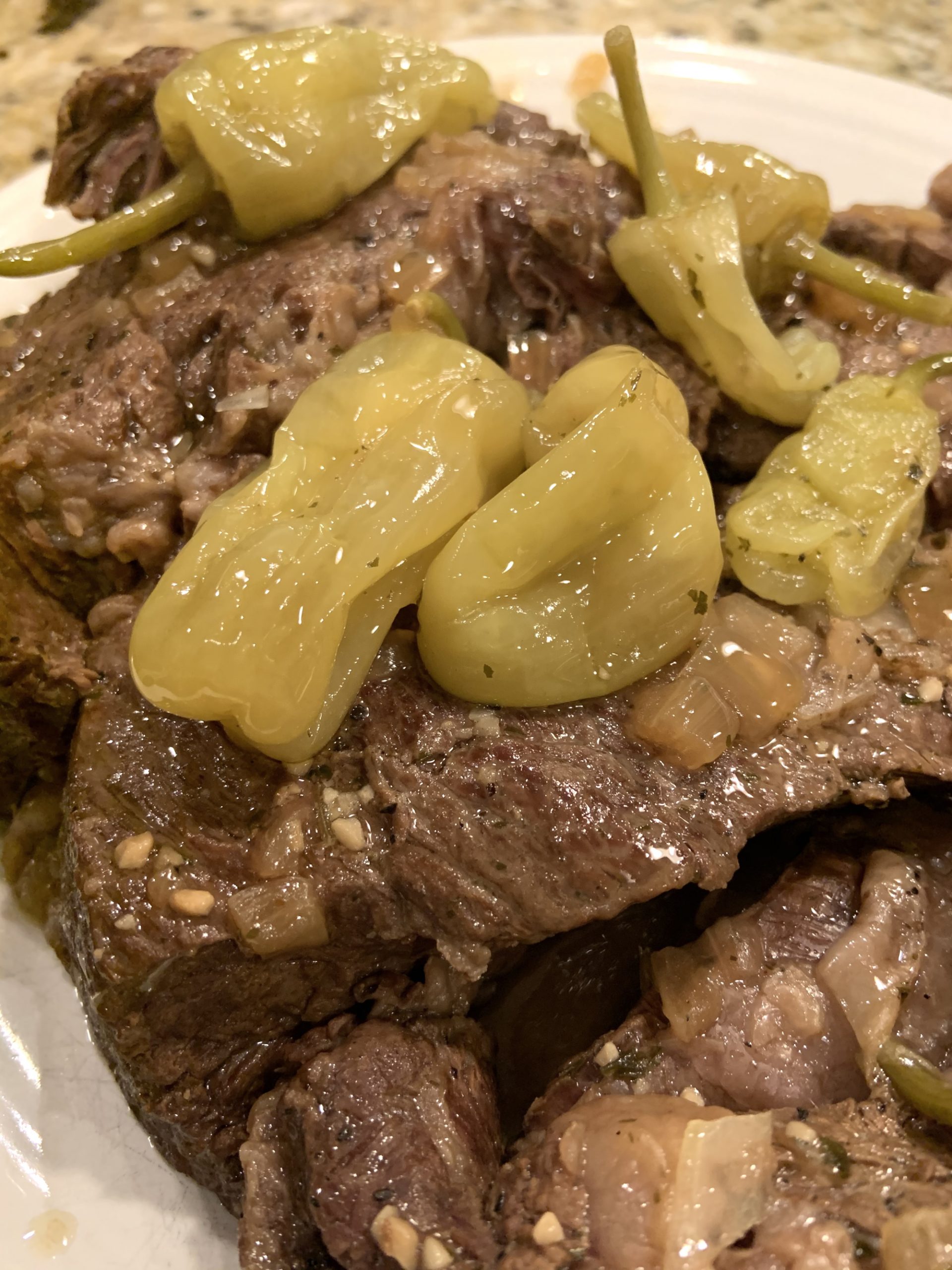 Yes! Instant Pot Mississppi Pot Roast can be keto and low carb! To assure that it is fully keto, skip making a thickened gravy for it with flour. Or use something like tapioca starch for the gravy.

Some pressure cooker Mississippi pot roast recipes add sugar or serve the roast over noodles or mashed potatoes. Do not use those items if you want to stay keto. Likewise, I served mine with carrots and potatoes. You would want to pick a less starchy vegetable for your side dish.

Mississippi roast really isn’t Paleo given that the Ranch dressing mix is not completely clean, but it is pretty close to Paleo if you leave the flour out.

Start with a good cut of chuck roast. I find that chuck makes the best roast, especially for this recipe. Give it a coating of olive oil and season it a bit with Montreal Steak Seasoning or some salt and pepper.  Learn more about cuts of meat for roasts here. 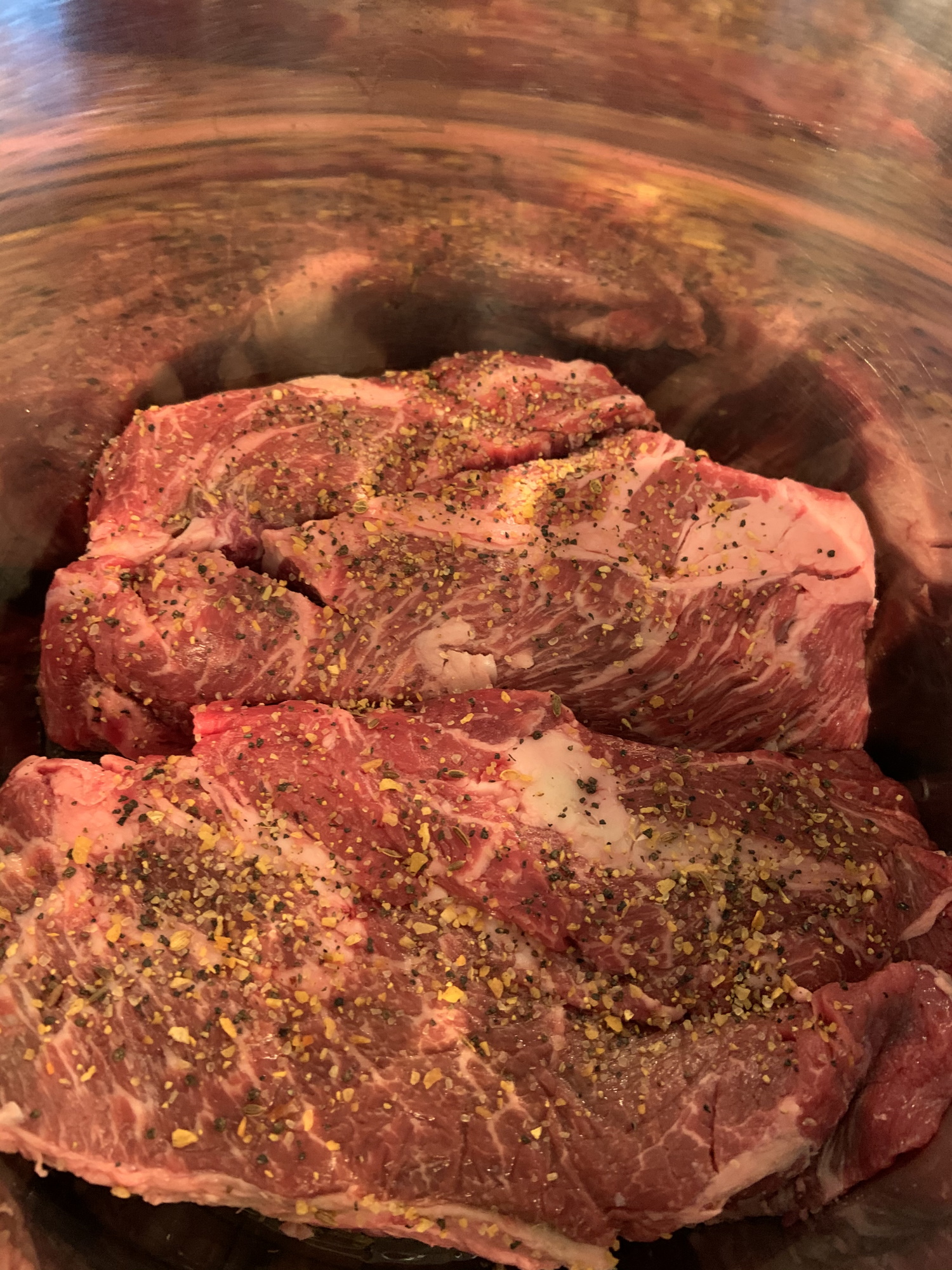 Sear the roast in the Instant Pot on saute mode. You might have to cut your roast in half to make it fit. I normally avoid cutting mine, but in this case my roast oddly came already cut, so I had two pieces.

You want the roast to be seared on all sides just until browned a bit. 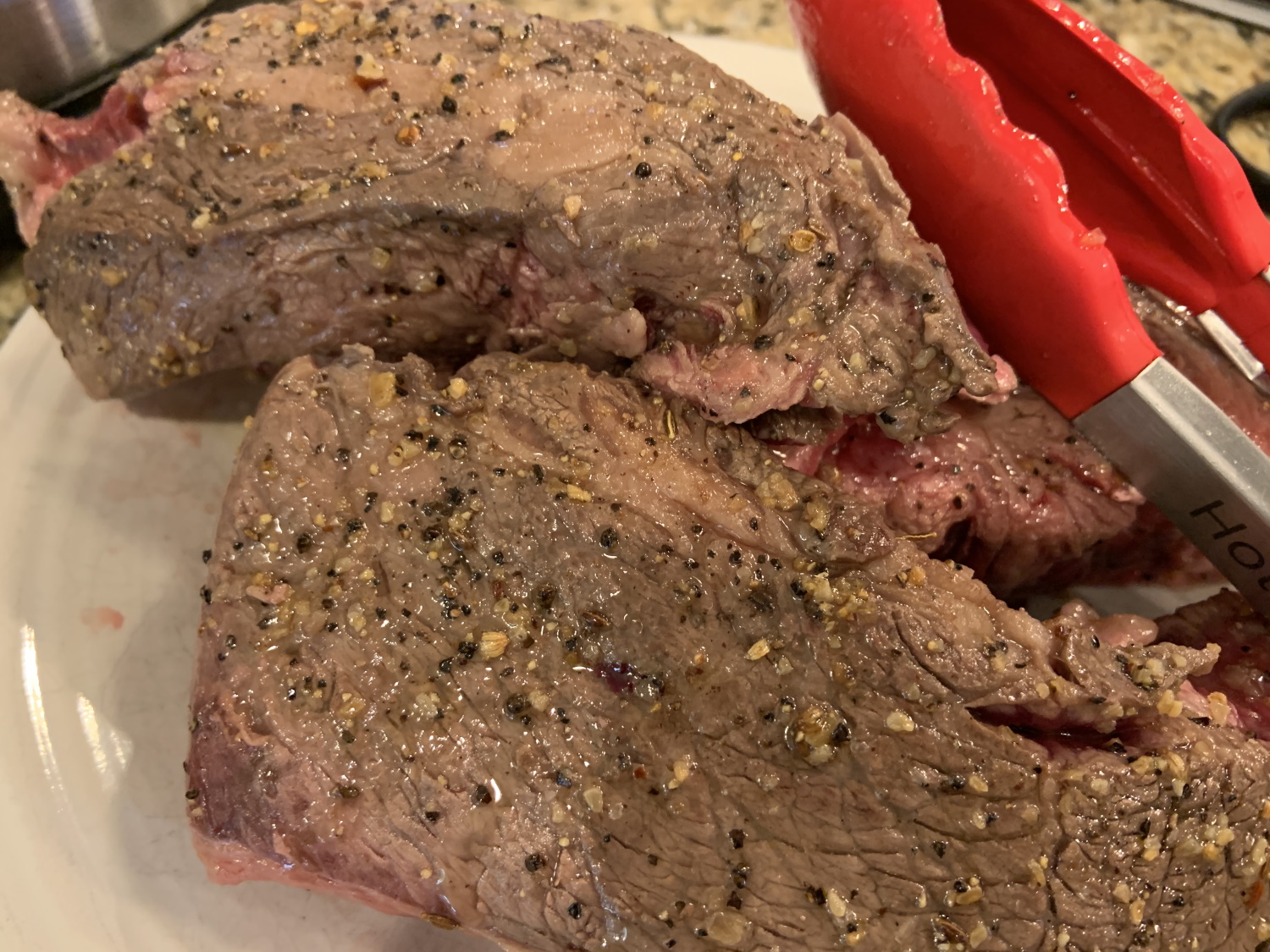 Remove the roast to a plate and saute up some onions and garlic in the Instant Pot.

I use prepared minced garlic for simplicity instead of fresh. 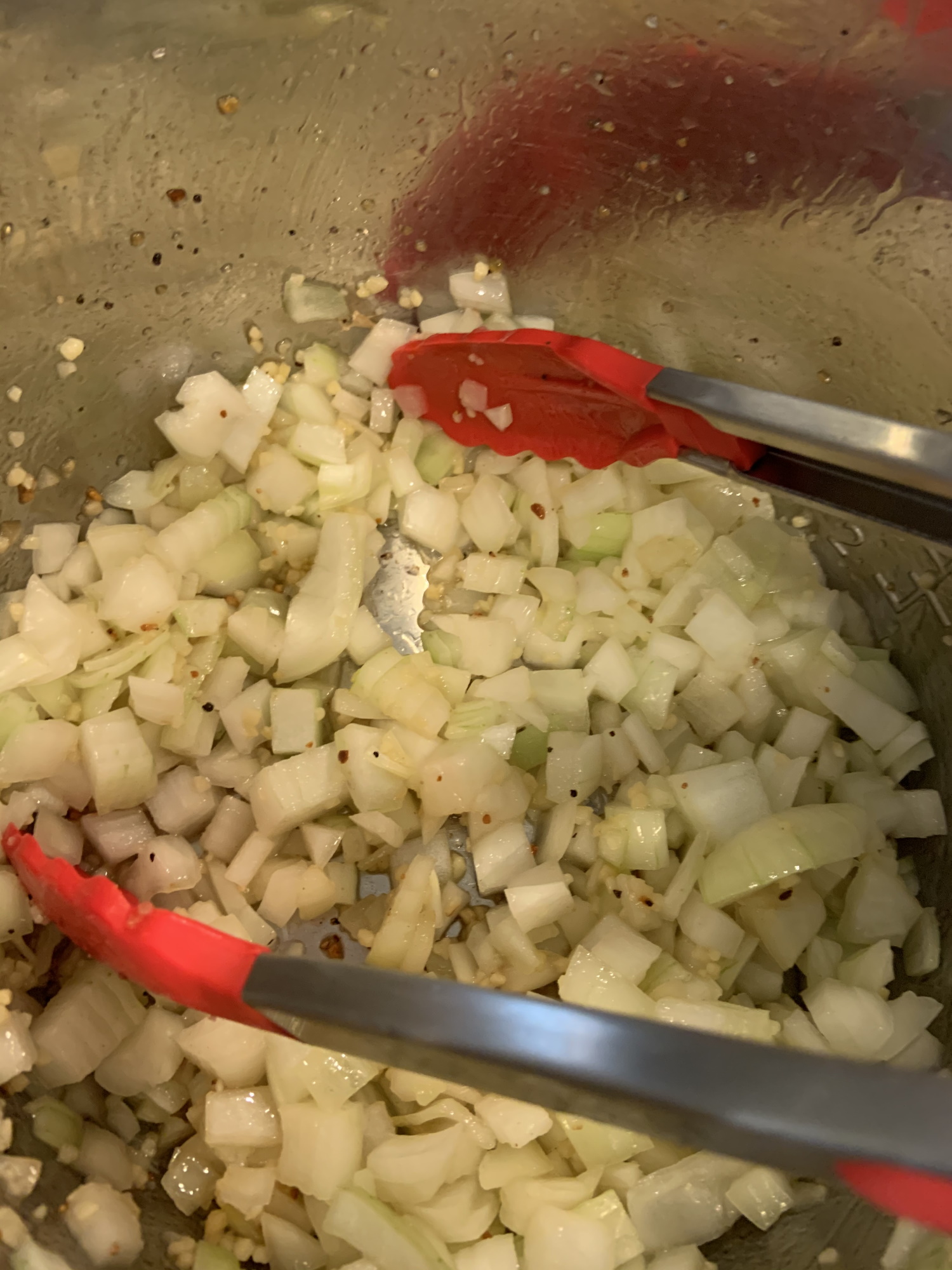 Next, add 3/4 cup beef stock or beef broth and deglaze the pot. You could use water, but it tastes a ton better if you use stock or broth.

Add a jar of Pepperocini peppers plus 1/2 cup of the juice, a package of ranch dressing mix, a package of Au Jus mix, and a cut up stick of butter to the pot. You can half the amount of butter if that is too rich for your tastes. 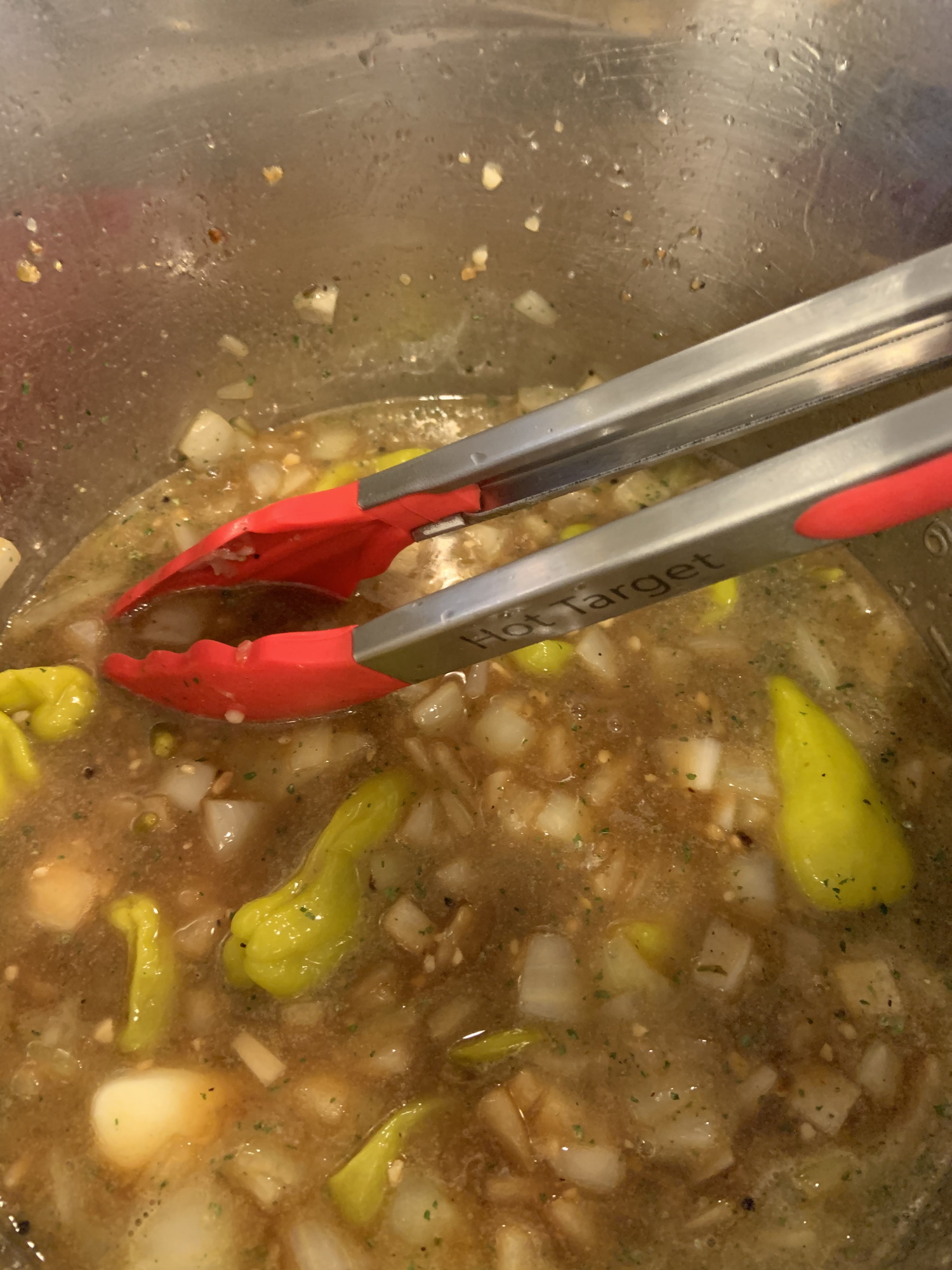 Stir everything up on saute until the butter melts and then add the roast back to the pot. 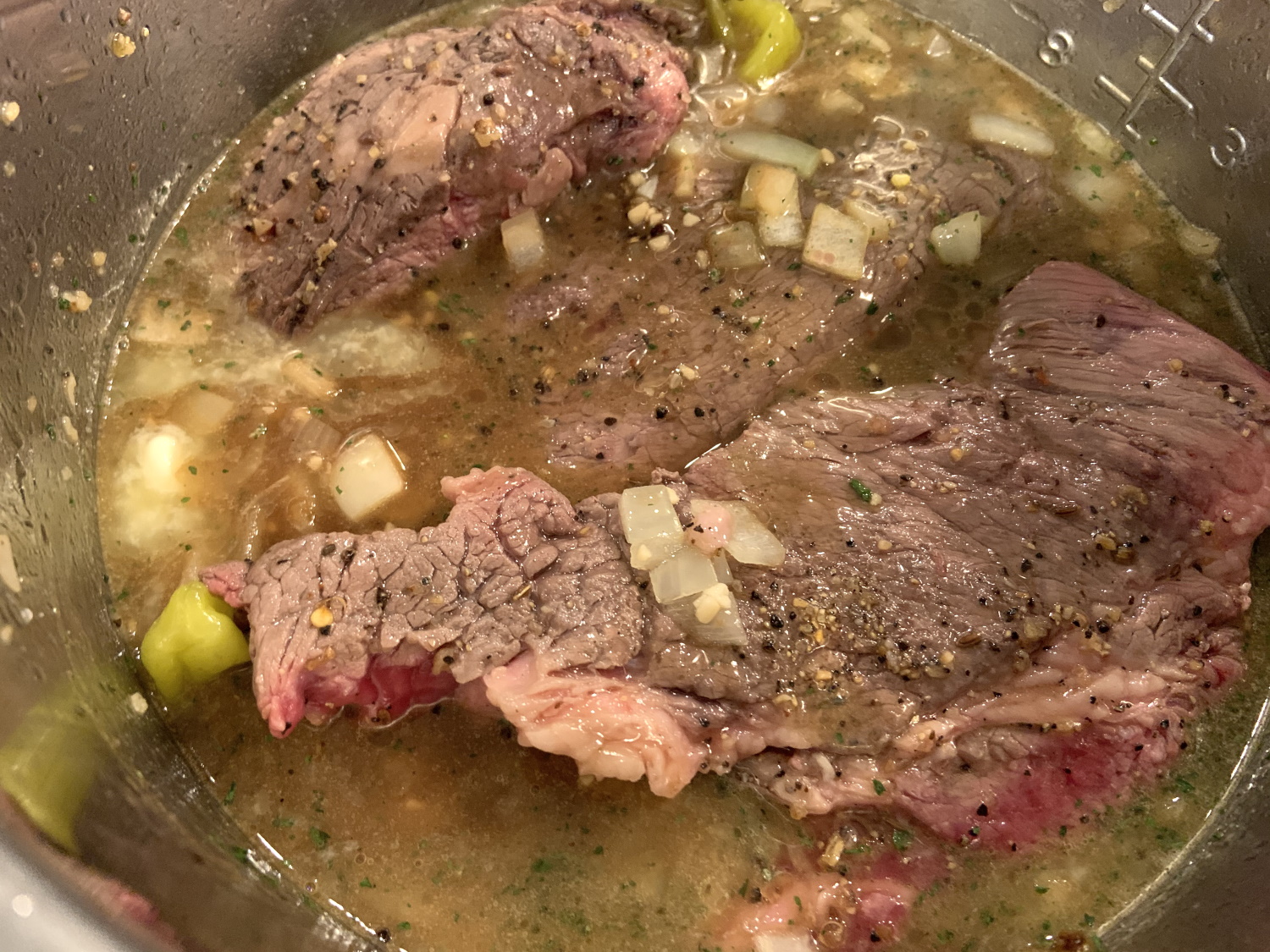 If your roast is more than 3 pounds, add 20 minutes per pound to the pressure cooking time. 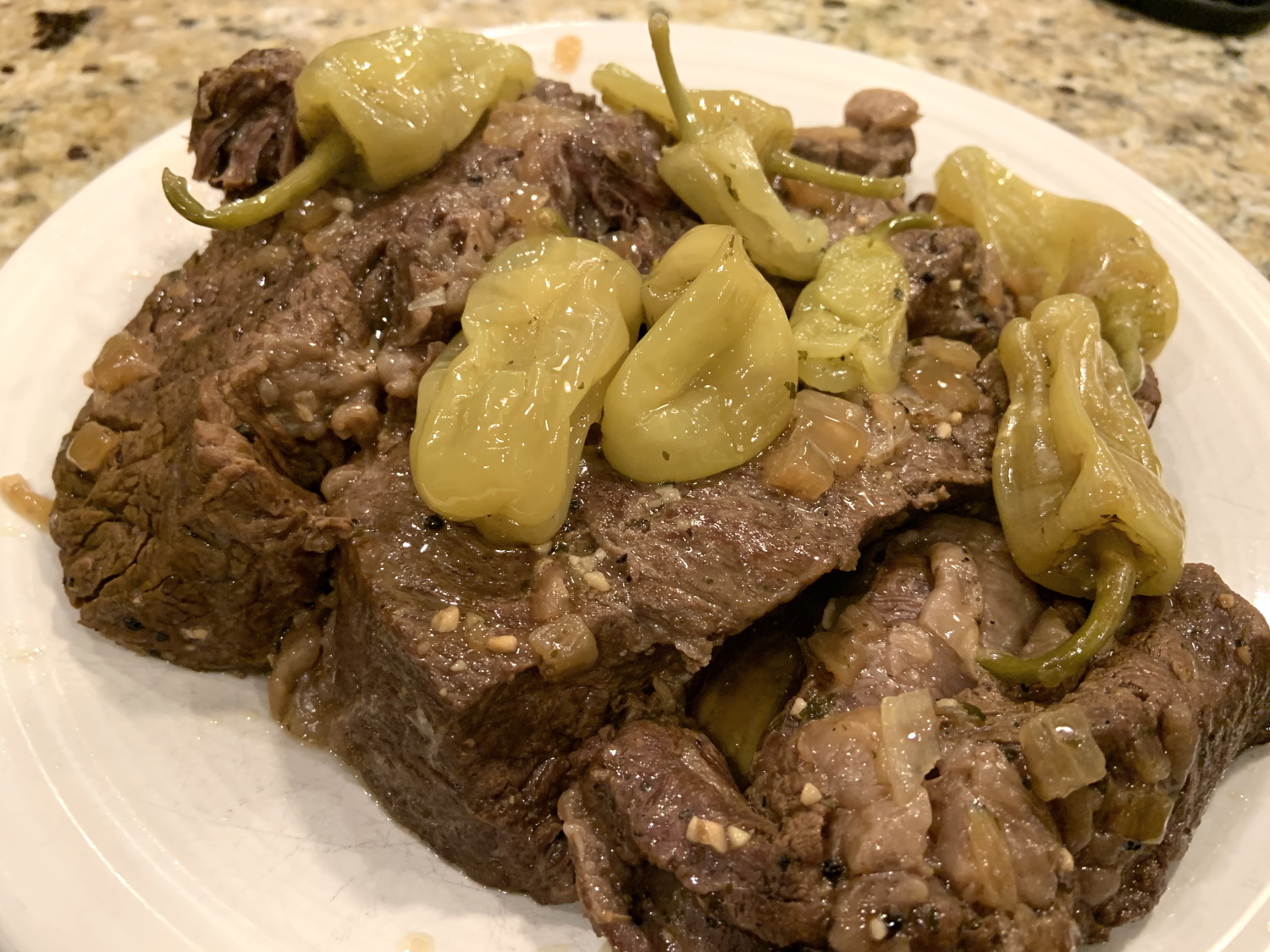 When done, remove your roast and the peppers to a plate and, if desired, make up some gravy with the drippings.

You can do that by mixing 3 tablespoons of flour with a bit of water and about 3 tablespoons of melted butter and then adding that to the pot and simmering until it thickens. That takes about three to five minutes.

I often skip the gravy and just serve my roast with some of the broth. It stays low carb or keto that way too. 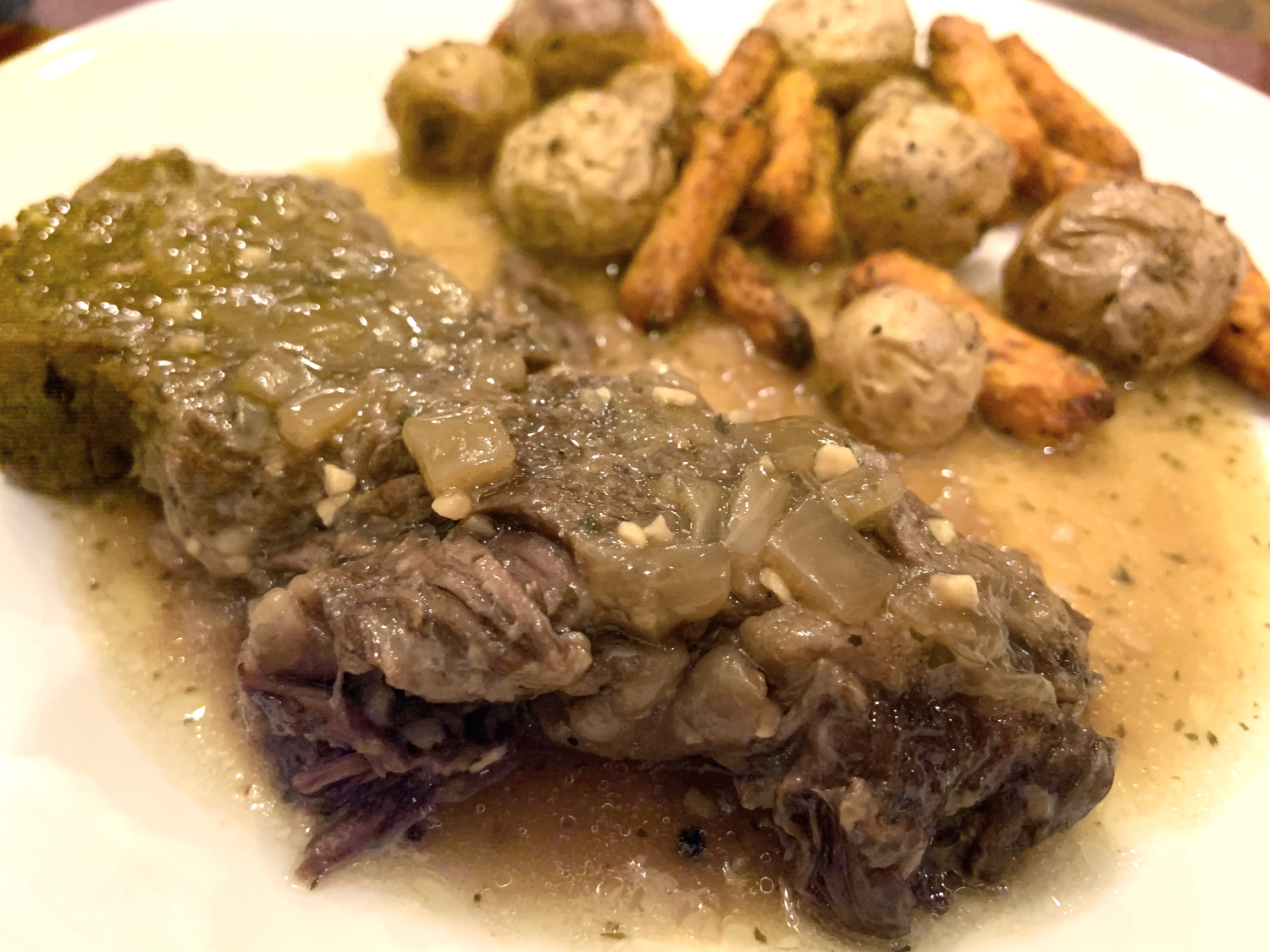 I served my Instant Pot Mississippi Pot Roast with air fryer carrots and potatoes made in the Instant Omni.

You can also make veggies in the Instant Pot by covering your roast with foil after you remove it and pressure cooking your vegetables in the juices for a couple of minutes. See more on that in my Instant Pot Pot roast guide. 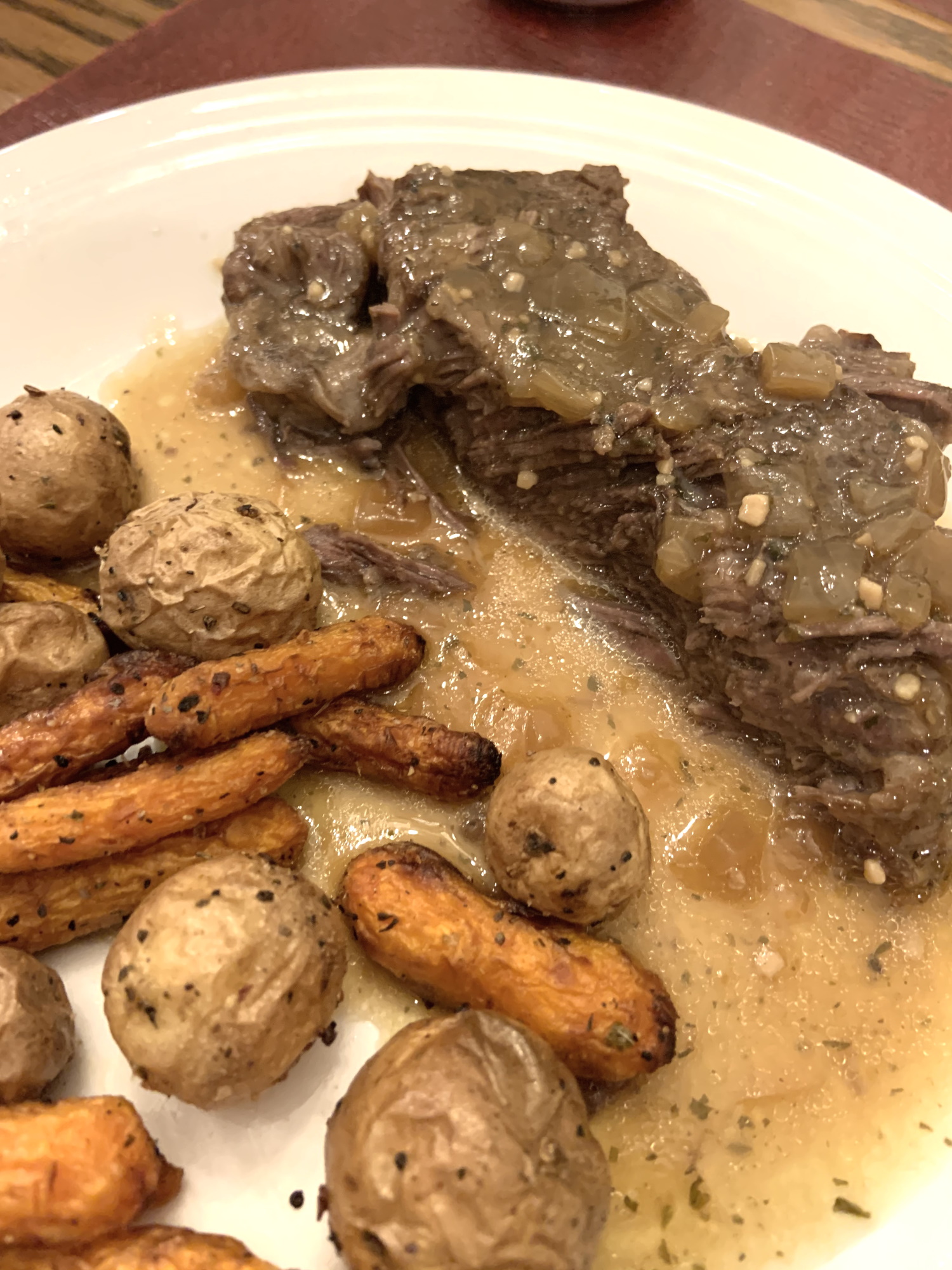 Here is the recipe!

You can cut the butter in half for a less rich roast.

To cook vegetables for the roast in the Instant Pot, add them after removing the roast and pressure cook for 3-5 minutes.

The Nutrition values are based on also making the gravy. For Keto, if you skip the gravy the carb count will go way down.

The Nutrition values are based on also making the gravy. For Keto, if you skip the gravy the carb count will go way down.

[…] is one of my go to recipes for a simple side to serve with things like Instant Pot Mississippi Pot Roast. See also my recipe for Air Fryer Vegetables in the Instant Vortex […]